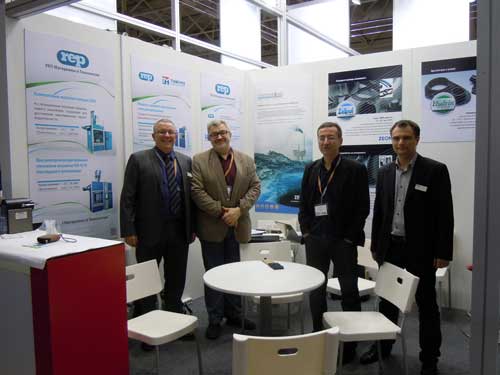 The Interplastica show was successfully held at the Moscow Expocentre from January 19 to January 22: 828 companies and 38 countries took part in this event.

Despite the economic ill feeling (drop in the Russian Rouble, crisis of the oil producing countries, etc.), the show organisers could register a total of 20,900 visitors, which means 1,900 entrances more than in 2015; a sign of interest in this event on the part of the plastic and rubber industrial partners.

Like every year, REP International participated through its subsidiary REP M&T in this major event, which rallies the activities of the plastic and rubber industry.

REP has already been active on the Russian market since 1965. REP strengthens its position in Russia, more particularly in the CIS countries thanks to its subsidiary, which distributes high-tech rubber grades, sells REP rubber injection presses, procures spare parts and makes sure the maintenance service in these territories.

Russia represents a strong potential despite its current difficulties. The crucial re-industrialisation of the country, which is strongly supported by the Russian Government, is an actual opportunity for innovating industrial technologies.

This show led to various encounters around new currently being developed projects and allowed us welcoming our devoted customers.