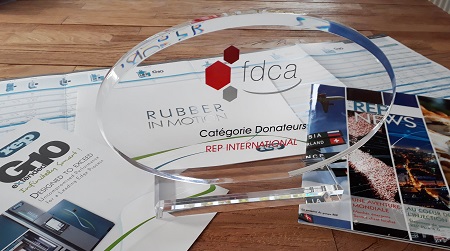 REP is awarded the Trophy of Patronage as a Donor

REP international was awarded the trophy of Patronage as a Donor on November 7th during the event organised by the Rubber Foundation in Paris under the auspices of its President, Mr. Jacques MAIGNÉ (C.E.O. of Hutchinson Group).

The opportunity to recall the prestigious past of our company and its founder, the invention by REP of the rubber injection process in the early sixties and our continuous commitment dedicated to research and development with professionals in the field of rubber injection.

The Rubber Foundation was implemented on June 12, 2014 after an agreement signed between its member-founders and the Foundation of France and is acknowledged as a public interest foundation.